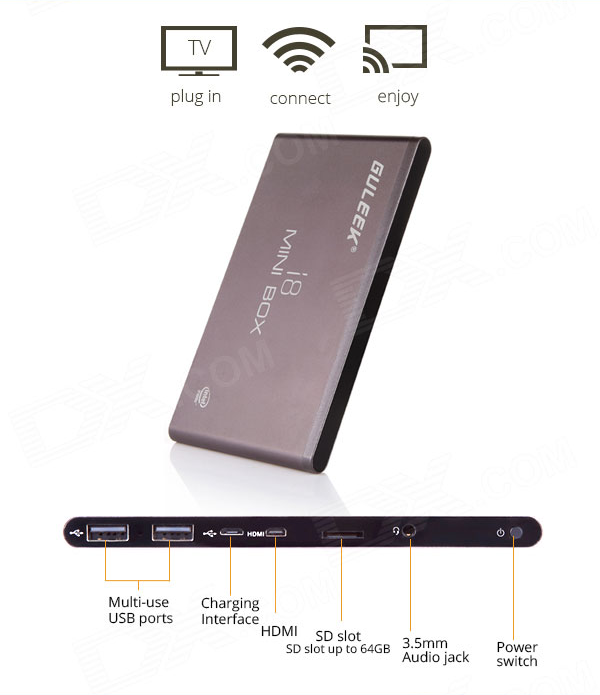 This is probably the neatest thing I've seen in a while. This is a full computer with a quad-core Intel Atom processor, 2GB RAM and a 16GB SSD. The power connection is a MicroUSB port. It has HDMI, audio out, 2 USB 2.0 ports, built in wifi and a port to add a MicroSD card. All of this for $104 from dx.com. [Link]
From what I've read, the version of Windows 8.1 it runs is a special Bing version that is either free or really cheap for the manufacturer. It is from China so it's nice that it's not a pirated version at least. The word on Linux compatibility is that it isn't, so far.
This device has a 3,000mah battery integrated as well so it can run for a time without being plugged in. I'm not sure what the run time is at this point. The dx page shows it being run headless with an Android tablet controlling it. I'd assume you can do the same thing with IOS and Windows tablets using a remote desktop application.
This liliputing.com article about this device mentions a Vensmile iPC002 system that is very similar but with a larger capacity battery and double the built in storage. This is typical for Chinese products to have a lot of nearly identical looking products from different companies that may or may not have different specifications.
It'd be pretty nice if one of these companies brought out one with the ability to upgrade with a M-SATA or similar SSD card.
I could think of a number of uses for a device like this:


Intel Atom processors aren't known for their processing performance. This is still limited compared to even a Celeron, but in many cases it might have enough horsepower to do a necessary task.
Posted by James Hall at 11:57 PM